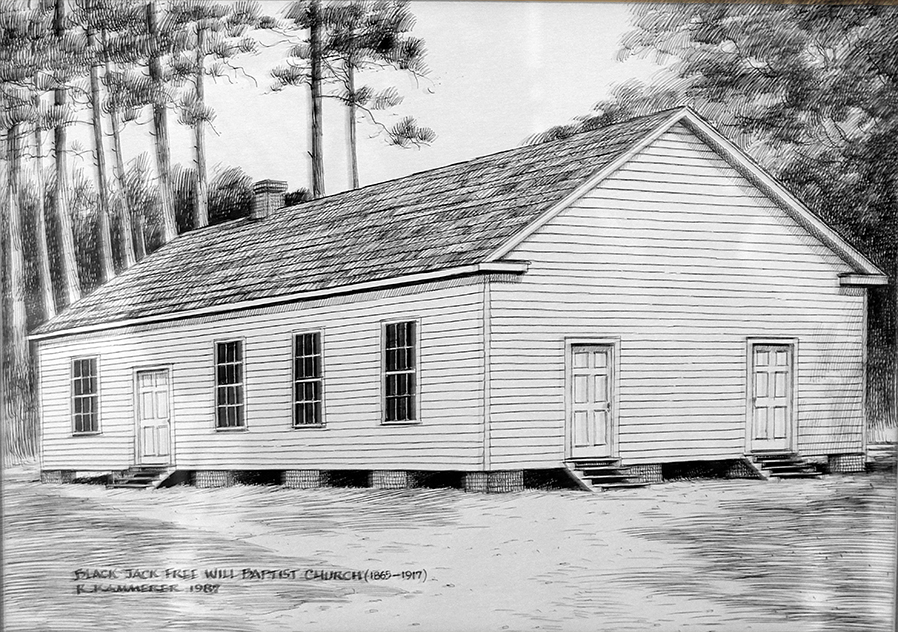 A Free Will Baptist church was begun as early as 1831 at Black Jack, which is located in the southeastern section of Pitt County. Ancestors have handed down the word that prior to this there was a log meeting house of worship in the community. To meet the spiritual needs of the people, it might have been used by ministers or traveling evangelists of different church denominations.

On August 17, 1831, William Mills sold a parcel of land to Urias Elks, Robert Dixon and Jordan Cox, appointed trustees for the Free Will Baptist Church Meeting House which was intended to be built at the crossroads between William Mills and Harvey Mills. This deed was registered in 1835 and witnessed by Noah Arnold and Ares Buck. The church was named the Imitation Free Will Baptist Church Meeting House. One of the original trustees Urias Elks died in 1852 at the age of ninety-six. His obituary in The North State Whig newspaper stated that he had been a member of the Baptist church for forty years. At the Bethel conference in 1838, another trustee Jordan Cox, was petitioned by the Imitation Church to be ordained at the next annual conference. The Imitation Free Will Baptist Church reported at the conference in 1845 that it had twenty-four members on roll and preaching each first Sunday.

From 1851 to 1860 Cullen Smith was treasurer of the church and recorded the names of male members, who were assigned dues, in a hand sewn book that has been preserved through the years. He noted that Noah Arnold was treasurer prior to himself. Under the heading of Imitation Meeting House, one entry showed that John S. Dixon was paid for furnishing the church with basins, towels, pitchers and candles. Other entries denote payments to William Dixon and P. W. Arnold for communion and to Cullen Smith for keeping house. After Cullen Smith’s last treasury report at the end of 1860 no more records were kept until an unidentified treasurer wrote financial entries from April 1865 to October 1871 in the same book. During the Civil War the church house was sometimes used as a shelter for Confederate soldiers; so on Saturday, March 26, 1864, the Federals burned it. A wooden plank church was built back with two front doors, with the men and women using separate doors and sitting on separate sides of the church. When the new building was constructed, its name was changed to Black Jack Free Will Baptist Church and appeared thus in the 1871 conference minutes, which also reported ninety-seven members on the church roll.

Elder Oliver Harper was a pastor of the church for a considerable number of years during this time. Other pastors of the church during this era are not known, but records show that Elder Bryan Heath officiated at marriages and funerals of the church populace during 1876 through 1889. A newspaper account of a wedding held in the church in 1883 stated that Elder A. A. Tyson was the officiant.

The church flourished so greatly that by 1916 with a membership of 364, the existent building became inadequate. In May of 1917 John A. Hudson, Lewis A. Arnold and Nasby Mills were named as directors and empowered to make, sign and receive any contracts in regards to building the new church. Upon completion in 1918 the church was furnished with new pews. In 1929 a bell was erected in the church steeple.

Over the years a tremendous building program has taken place at Black Jack. During the 1940′s the church windows were replaced with memorial stained-glass windows. A parsonage was built in 1950 and 1951, with the Rev. Sam Kennedy the first occupant. Sunday School rooms were added to the church building in 1947, in 1953, and again in 1956. New pews and pulpit furniture were placed in the sanctuary in 1958. A fellowship building with kitchen facilities was constructed in 1960 and 1961 and named “The Cherry Educational Building” in honor of the Rev. Floyd B. Cherry. In 1966 the sanctuary and classroom wings were brick veneered. A new educational annex was added in 1977 at a cost of $113,000. In the fall of 1984 the old steeple was removed and replaced with a new one. Once this was completed a renovation of the sanctuary was begun. This was completed and dedicated in April of 1986. Since then the W. Les and Fronie Buck Famiy Life Center has been built, from sale of land given by the Bucks. It has a kitchen and eating area, a conference room and basketball court, which is also used for other activities. The Black Jack Free Will Baptist Church has been the focal point of the community for one hundred and seventy two years or more. With a membership exceeding more than 600, the church strives for spiritual growth of its members. The church’s motto is “a friendly church with a warm welcome.”